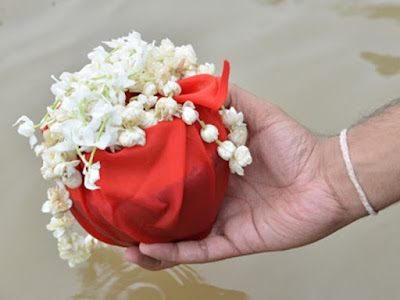 Many people lost their loved ones during the Corona pandemic, but could not perform their last rites properly. There is a tradition of Asthi Visarjan (immersion of ashes)  in the holy Ganges river and people bring peace to the dead souls by performing Asthi Visarjan and Shradha rituals in Varanasi, Prayagraj, Haridwar and Gaya. Now the ashes can be sent from post offices to these places through speed post, where Asthi Visarjan and Shradha rituals will be done by Om Divya Darshan (ODD), a socio-religious plateform. The above information was given by Mr. Krishna Kumar Yadav, Postmaster General of Varanasi Region. 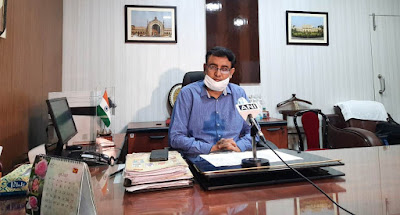 Postmaster General Mr. Krishna Kumar Yadav said that, to avail this facility, the desired person will have to register himself on the portal of Om Divya Darshan  http://omdivyadarshan.org .  After having registered for Asthi visarjan or Shradha ceremony on the ODD portal,the packet of Asthis can be sent by the said person through the post office by speed post to Varanasi, Prayagraj, Haridwar and Gaya.  The Asthi packet should be packed properly and 'Om Divya Darshan' should be inscribed on it in bold letters, so that it can be distinguished.  The sender will write his full name, address, mobile number etc. on the packet.  The speed post charges will be borne by the sender only.

After booking the Speed Post, the sender has to update the booking details including Speed Post bar code number on the portal of Om Divya Darshan Sanstha.  Once the packet is received at the post office, it will be delivered to Om Divya Darshan's address.  After that, Om Divya Darshan Sanstha, through the empaneled pandits, shall perform the Shradha ceremony on the pre-decided date and time slot. Which would be live webcast to the family members of the deceased. Thereafter a bottle of Ganga water will be booked by ODD and delivered to the  family members of the deceased through speed post from Parliament street Post Office, New Delhi, said Postmaster General Mr. Krishna Kumar Yadav. 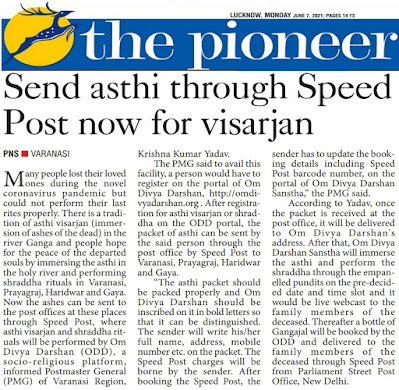 Now send the Asthis through Speed Post for Shradha rituals in Varanasi, Prayagraj, Haridwar and Gaya, Dept. of Posts & Om Divya Darshan made an agreement