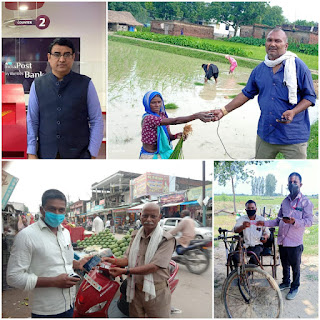 Varanasi Region of Postal Department has set a new record in Aadhaar Enabled Payment System under India Post Payments Bank. During the two day all India campaign, against the allotted target of Rs 2.79 crore, it has secured the first position in Uttar Pradesh and fourth in the PAN India by completing transactions of Rs 5.3 crore, which is 193 percent more than the total target. On this occasion, the Postmaster General of Varanasi Region, Mr. Krishna Kumar Yadav, encouraged all the Divisional Superintendents and Managers of India Post Payments Bank and extended his best wishes. During this campaign, which ran on 16 and 17 September,  more than ten thousand people in Varanasi Region were benefitted on the lines of 'Aapka Bank, Aapke Dwar'. Under this, from door-step to shop, Farms,  streets to boats in rivers, an amount of Rs.5.3 crore was provided to the people by withdrawing them from their bank accounts. 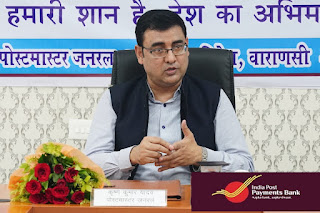 Mr. Krishna Kumar Yadav, Postmaster General, Varanasi Region informed that through Aadhaar Enabled Payment System, India Post Payments Bank is providing door-to-door withdrawal facility by postmen and Gramin Dak Sevaks to withdraw money from Aadhaar linked bank accounts of people. People sitting at home are now able to withdraw the DBT amount sent under social security schemes through the postman of their area, for this there is no need to go to any bank or ATM. Mr. Yadav informed that during this financial year (from April-2021) during the Corona pandemic, so far about 2.40 lakh people in Varanasi region have withdrawn an amount of Rs 90 crore from their accounts of various banks sitting at home through the Department of Posts. People have taken this initiative of the Department of Posts by realizing 'Aapka Bank, Aapke Dwar'.

Postmaster General Mr. Krishna Kumar Yadav said that, helpless people who are physically handicapped, old or remote rural areas where ATM facility is not available, postman of the postal department are available for withdrawal of money from their bank accounts. Every day an individual can withdraw up to Rs 10,000 from his Aadhaar linked bank account from the micro ATMs available with the postmen. 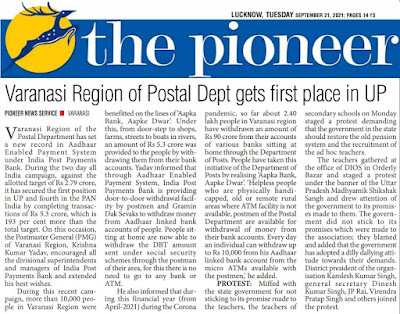 Times of India : Postal dept ranks 1st in UP with withdrawal of Rs 5.3cr through Aadhaar Enabled Payment System