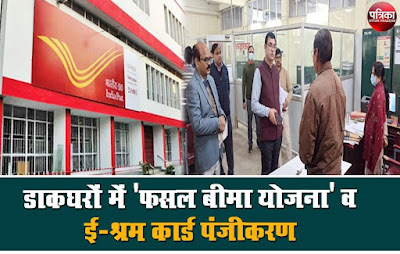 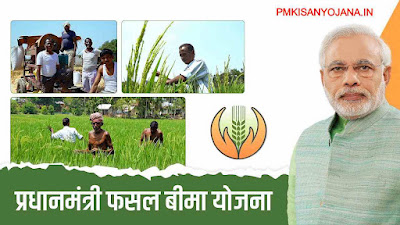 For the convenience of the general public, many new services are being expanded in the Post Offices. In this sequence, now farmers can take benefit of 'Pradhan Mantri Fasal Bima Yojana' through Common Service Centers set up in the Post Offices. The above facility is being made available in 1699 Post Offices of Varanasi Region, said Mr. Krishna Kumar Yadav, Postmaster General of Varanasi Region. He told that farmers has to attend the Post Office CCS along with Khatauni, ID card (Aadhaar card, PAN card, voter ID card, driving license) and bank passbook. A premium of 2% and 1.5% will have to be paid for Kharif and Rabi crops respectively.

Postmaster General Mr. Krishna Kumar Yadav said that apart from this, people associated with the unorganized sector can also get E-shram card from the Common Service Center established in the Post Offices, which is completely free. For this, the age should be from 16 to 59 years. Bank passbook and Aadhar card will have to be produced for registration.

Postmaster General Mr. Yadav told that a special campaign was launched for Pradhan Mantri Fasal Bima Yojana and E-shram in all the Post Offices of Region including Varanasi, Chandauli, Bhadohi, Jaunpur, Ghazipur and Ballia district, so that more and more people may be benefited from it. 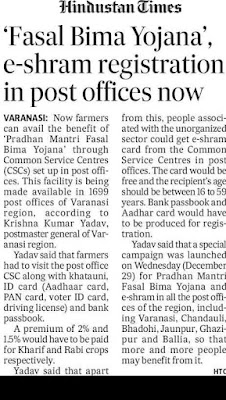 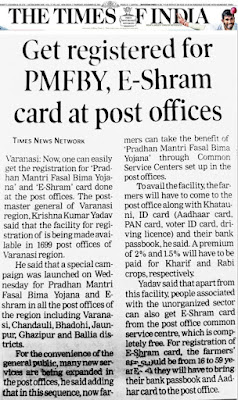