This year's Independence Day is special for everyone. The whole country is ready to celebrate the 75th anniversary of Independence as 'Amrit Mahotsav'. Prime Minister Shri Narendra Modi has also announced "Har Ghar Tiranga" campaign from 13-15 August. The Postal Department has been entrusted with the responsibility of providing the Indian tricolor flag for the campaign. Any person can get big size flag from the Post Office for Rs. 25. To ensure no shortage of flags and its timely delivery during the campaign, the Post Offices were open even on Sunday. Post Offices will remain open for this on 9th and 14th August also. The above words were said by Mr. Krishna Kumar Yadav, Postmaster General of Varanasi Region. 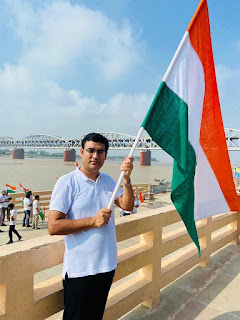 Postmaster General Mr. Krishna Kumar Yadav said that 1 lakh 11 thousand tricolor flags have been sold so far from the Post Offices of Varanasi Region. Even on Sunday, people kept on reaching the Post Offices and buying the tricolor for hoisting at homes and workplace. From school children and youth to teachers, government employees, public representatives, farmers, workers and citizens are buying the tricolor flag from the Post Offices. There is a lot of zeal among the people in rural areas also. Mr. Yadav said that on Sunday, the officers and employees of the Department of Posts took the initiative to create awareness among the people about the "Har Ghar Tiranga" campaign by visiting important and historical places. These includes Banaras Hindu University, Ghats of Ganga, Sarnath, Ramnagar Fort, Pt. Deendayal Upadhyay Memorial place in Varanasi, Tomb of Lord Cornwallis and Bhitari Stambh of Skandagupta in Ghazipur, Shahi Fort, Shahi Pul and Atala Masjid in Jaunpur, Nagwa, the birthplace of Shaheed Mangal Pandey, and Rattu Chak, the birthplace of Sher-e-Baliya Chittu Pandey in Ballia.

Postmaster General Shri Krishna Kumar Yadav said that the Department of Posts is playing vital role in the 'Har Ghar Tiranga' campaign under 'Azadi Ka Mahotsav'. The tricolor is being sold through Post Offices in cities as well as in remote rural areas for only Rs.25 (including GST). 20 inch x 30 inch size and made of polyester, this tricolor can also be purchased online through Post Office e-portal www.epostoffice.gov.in and can be obtained without any home delivery charges at your doorstep. For wide publicity, postmen are motivating people to hoist the tricolor at their homes from August 13 to 15 while distributing mail in the area, also, a special campaign is being run by the Department of Posts on social media as well. This campaign is working to take the collective consciousness of patriotism from door to door. Mr. Yadav said that the organizations or individuals who want to buy tricolors in bulk can apply with their details at the nearest Post Office. Tricolor flags will also be supplied to them soon.